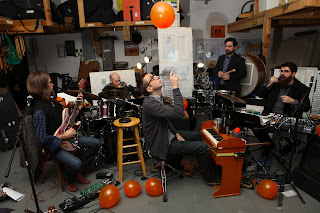 A year and a half ago, I posted a blog entry about our project Where (we) Live. At that time, it was in its earliest gestation. We knew very little about what we wanted to achieve, except that we were going to challenge ourselves to reach outside a collective comfort zone.

So Percussion was founded in the midst of a rigorous chamber music program at Yale. In order to focus on the skill of playing other people's music at a very high level -which is difficult enough to master on its own - we were laser-focused on what it takes to become an accomplished, cohesive group. We've never abandoned this core purpose, and those "10,000 hours" come in handy while making music.

The impulse to break away from the familiar and engage with other artists is inspired in part by two of our creative heroes: John Cage and Steve Reich. These famous composers are pillars of the American experimental tradition, but they achieved that status partially by having a social component to their work. Each of them did two things that we admire and emulate: start groups to play their music, and cast a wide net in their artistic community. Both worked with dancers, painters, sculptors, filmmakers, writers, etc.

Although our group was not originally founded to play our music, it has since become such an outlet, starting with Jason's amid the noise project. We arrived at the same place as Cage and Reich, but slightly backwards.

We began to feel that our net could be cast much wider. Of course, there's always an organic element to expanding your community: chance or arranged meetings lead to new projects, membership in a larger community sparks a common interest, etc. We thought it would be interesting to formalize this process a bit, by explicitly inviting people to contribute something unique and personal to our creative process.

Where (we) Live is that formalized process. We have invited a small group of core collaborators (music, video, performance art), and a larger group of short-term collaborators to work with us on a new show.

The challenges are kind of obvious: how to bring so many voices into a room without creating an incoherent mess? I can't say for sure whether we have solved the problem yet, but one thing was absolutely crucial in tackling it: a development process, where we can try our ideas out in front of audiences.

For the performing arts, this is important, but scary. No matter how many times you try something in your studio, there is no way to tell whether it is working until people see it. Perhaps one of the appealing things about classical music is that the music itself has long since been "workshopped" - over countless performances and critical evaluations - and "all" we have to do (ha ha) is play it well. Of course, that task itself requires a lifetime of dedication and problem solving, especially as the performance level expected of the same music goes up over successive generations.

Vermont Performance Lab enters the picture just at the moment an artist needs it the most: when ideas have formed into material, but time, resources, and an engaged community are needed to pull it across the finish line.

So Percussion first worked with VPL in the summer of 2008, on the Music for Trains project: a gloriously sprawling journey of site-specific performances around the train stations of southern Vermont. It was a pivotal moment in our development as a creative group: far more ambitious and daring than anything we might have come up with on our own, with a force of vision and organization behind it (Sara Coffey).

That experience put us on a new path, which eventually lead to our first show at BAM, Imaginary City.

So VPL seemed to be the perfect place for another ambitious, untested idea. Sara helped us craft a ten day residency which we're currently in the midst of. First, 3 days at Guilford Sound's recording studio to assemble the core of the music, then a week of workshopping the live show. For each show, a different artist from Southern Vermont would be curated by Sara to appear as our "special guest," the final piece of the puzzle that will change at each venue.

We've now completed two of three works-in-progress shows. Monday night we performed with Michelle Holzapfel, a wood artist and master seamstress. She brought her sewing machine, which we amplified and lit. Tuesday night the poet Verandah Porche joined us. On friday the potter Steve Procter will be our guest.

The process of recording and performing the show has lead to surprising results, but not even in the way we imagined. What started out as possibly the most experimental project we've ever embarked upon has slowly and surely become one of the most personal. The formalized process that I mentioned above gradually gave way to the real relationships of the collaboration. As we began to show it to people, they would tell us what it meant to them, and one theme kept coming up over and over again: home.

Below is our latest description of the project.  Enjoy!

Many thanks to Ain Gordon (director of the project), for this description.


Where do we live?

For eight years, So Percussion has made our home in Brooklyn amid two million five hundred thousand others. In our city, each of the group’s four members has constructed a personal ecosystem we call home. These homes are bound by space, time, sound and image. Equally, these spaces house rewarding, frustrating, supporting, damaging, tangible and never understood relationships.

When we leave those homes, our four members unite to create another artistic home, with its own unspoken rules and expectations; its own rhythm of interaction, its own banalities and mystery.

Where (we) Live questions all these homes by purposefully inviting the unknown to “come on over.” We’ve asked video artists, songwriters, painters, choreographers, directors and others to substantively alter our process. The resulting performance contains a society of possibilities: composed pieces, chance elements, visual associations, and theatrical interactions.

Grey McMurray is a songwriter/guitarist. He has written a series of songs about our homes. So has worked extensively with Grey to on these compositions which will be featured on an upcoming Cantaloupe Music release. He will be performing with us onstage at each show.

Martin Schmidt is a video artist. His videos heighten our focus on ordinary elements, bringing us into different homes framing the un-noticed. These videos are projected throughout on rough found surfaces, scaled to a modest life size.

Emily Johnson is a choreographer. She will dictate secret instructions to the performers via an onstage assistant. These instructions will differ at every performance generated in response to the moment with the power to alter.

Ain Gordon is a writer/director. He functions as a dramaturg and director, a fifth voice in Sō Percussion’s decision-making process, threading the project’s purposefully diverse elements and desired resulting chaos into a portrait of something that cannot actually be “seen,” home.

A guest artist in each town will collaborate with us in a short residency. We are looking for people who are good at what they do -be it a musician, writer, visual artist, or some other kind of performer - discovered with the help of the presenter in each location. We welcome the unusual dialogue of the unexpected in these more immediate interactions, giving ourselves only one day in person to rehearse with and get to know this individual. Our hope is to harness the power of new friendships and impending performance to spawn a different type of creativity.

The BitKlavier: A Performer's Perspective

This post takes the format of a formal-ish paper about my experience of developing a practice on the BitKlavier. It goes quite in-depth, a...