This year Sō Percussion embarks on a retrospective project looking back on our first 15 years of commissioning new works for percussion quartet. The ruminations below are an extended exercise in getting myself psyched up to write about it all. 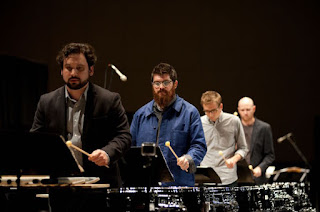 When I write about music, it’s a kind of advocacy. I believe scholarship is important, and I employ those tools occasionally in order to support the subject I’m writing about. But the nature of my career as a performer has lead me right into the thick of things, working with living composers to make new music all the time. I encounter the music I know best every day while I’m playing it, and when I write about it, I see this intimacy as a strength.

I remember as a student imagining that there was a disembodied objective-consensus-monster moving through classical music history making decisions about what music to keep and what to discard. I knew it must have consisted of a collection of people, but their purposes and agendas were opaque to me. I heard a lot of older musicians talking about “our repertoire” and “the classics,” and it seemed that I was mostly expected to take the quality of the work they referred to on faith. The objective-consensus-monster is a common fallacy (which I perhaps just made up), or actually a product of lazy historical thinking. There are always specific people influencing any canon, advocating for certain things to survive. In many cases, those influencers are artists themselves, taking inspiring ideas and branching off of them to create new veins of work. Sometimes they are writers, other times listeners. In most cases, the genesis of the influence is not as widely distributed or as amorphous as we might imagine.

One of the most vivid examples of this involves Felix Mendelssohn’s tireless promotion of the music of J.S. Bach, passed along to him by connoisseurs like his great aunt Sarah Levy. Levy maintained an active salon which presented Bach’s music. For decades after his death, Bach’s work was marginalized and nearly forgotten, appreciated as the work of an accomplished craftsman, but very much out of style. Mendelssohn lead a number of efforts, most famously his triumphantly massive performance of the St. Matthew Passion in 1829, which almost single-handedly restored Bach’s popular reputation and lead to a culture-wide revival of interest in his music which has not yet abated. (The library of congress has a tidy summary of the events here).

In Bach’s case, a widespread consensus did congeal after the efforts of these early 19th-century champions, but the push toward acceptance was delivered through the social vehicle of spectacle and via the authority of a respected composer and conductor. If not for Mendelssohn, how might we view Bach now? Perhaps we would still have acknowledged and discovered his greatness, but nothing in history is truly inevitable.

In 1802, before Mendelssohn was even born, another German named Johann Nikolaus Forkel published the first substantial biography of Bach. In his forward, we find this declaration:


“For Bach's works are a priceless national patrimony; no other nation possesses a treasure comparable to it. Their publication in an authoritative text will be a national service and raise an imperishable monument to the composer himself. All who hold Germany dear are bound in honour to promote the undertaking to the utmost of their power. I deem it a duty to remind the public of this obligation and to kindle interest in it in every true German heart.”

In Forkel’s case, appreciation of Bach’s work was hardly just a case of idle aesthetic appreciation. He advocated for Bach as a German Alpha Composer, cajoling - rather creepily, if the tone of this translation is accurate – ordinary people to cultivate a love for his music as a matter of patriotic duty. Did the overwhelming quality of Bach’s work draw him to this pronouncement, or was he already looking for an icon to fill the role? Likely, it was a little of both. What we know is that his agenda succeeded: the German-centered Pantheon of composers still exists, and Bach is right at the center of it.

As a college student, when I first encountered these historical complexities, it turned me off to the idea of the canon, the classics, any of it. I didn’t want to be manipulated by dead German guys! But I realized that there is a further fallacy in thinking that just because there is a social or political motive involved in promoting music, that it can’t also be truly great. It often is!

I felt empowered knowing that “objective” greatness was not some mysterious and disembodied force propelling Bach’s work into our time. I knew who these guys were that believed in it, and I vaguely knew why. I was more or less free at this point to accept or reject their points of view without stumbling through the objective-consensus fog. And I dared to make up my own mind. This sometimes lead to strange moments in lessons, when I was liable to offer up the opinion that honestly Bach was a very excellent composer. A teacher would gape at me like “we knew this already, Sherlock,” but I liked the idea – real or illusory – that I was deciding for myself, and that I had concrete reasons for doing so.

A lot has changed in 200 years, and my own motives are very different than Forkel’s. I do want every American to know about Steve Reich’s music, but I wouldn’t go so far as to make an argument for patriotic nationalism based on it. Furthermore, my position in relation to the music I advocate for is much closer than Forkel or Mendelssohn were to Bach.

As a result, I always write better when avoiding the trappings of authoritative language, or of claims of universal importance. This is especially true when describing music written by a friend who lives down the road and our kids play together (Dan Trueman), or somebody whom I unabashedly worship (Steve Reich). When you work closely with brilliant people, they transform your life, and there is no way to step back from that and achieve critical distance, nor would I even care to do so.

My best teachers always showed me why a piece of music mattered to them. They never expected me to take it on authority. To them, the qualities of the work were so evident that no such authority was necessary. I try very hard to practice this kind of evidence-based teaching with my own students.

In the coming months I’ll be examining a number of pieces written for Sō Percussion that strike me as significant. A few of them have had the time and exposure to become important to other musicians and audiences as well, which is wonderful. Many of the pieces have qualities that matter to me not only intrinsically, but as statements and ideas that I think are invigorating for the percussion medium going forward. As I’ve written often recently, Cage had it nailed in proposing that “percussion” is a refreshing idea for our whole culture, not just an exciting new(er) offshoot of contemporary classical music.
Posted by Adam at 10:16 AM

The BitKlavier: A Performer's Perspective

This post takes the format of a formal-ish paper about my experience of developing a practice on the BitKlavier. It goes quite in-depth, a...